Your partner for the 2020 election cycle.

Whether you’re running for city council or the Oval Office, Busy Beaver will make sure your political pins arrive on-time, every time. And we don’t just have your political button needs covered. Our campaign merchandise offerings include:

Hit the campaign trail with high quality, union-printed products. Contact us to get your political buttons order started. 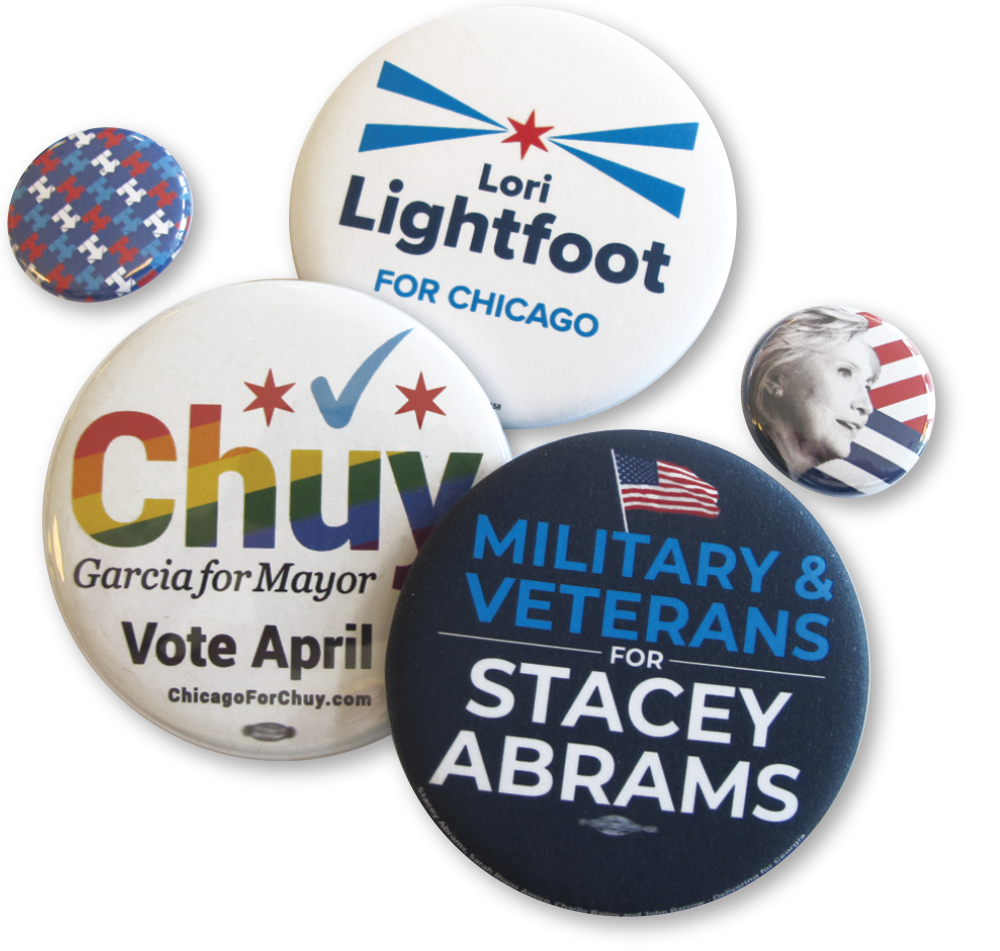 In 2015, as a mostly unknown politician, he forced incumbent Rahm Emanuel into the first mayoral runoff election in Chicago history. Chuy had only a fraction of the financial support of his opponent, but with the help of his grassroots supporters and custom political buttons he nearly won the election.

Garcia’s campaign approached Busy Beaver Button Co. with an idea to create campaign buttons featuring Chuy’s iconic mustache. His supporters loved the buttons and proudly wore them. In fact, so many people were asking for them that the campaign had to order weekly to keep up with demand.

But it wasn’t just the cute mustache that had people demanding the pins. So many people believed in what he stood for and the Chuy buttons were the perfect way for them to show their support.

Make your own campaign buttons with Busy Beaver. Just request a quote below. 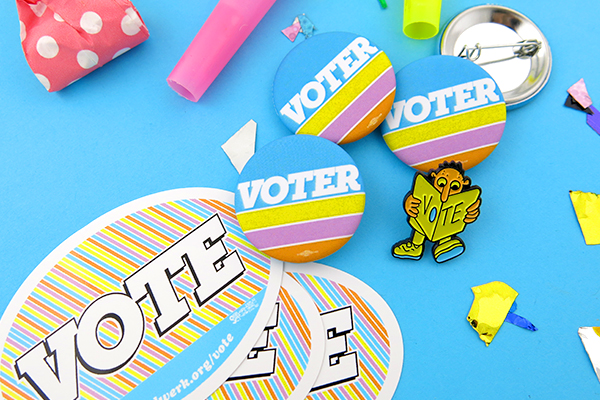 Say hello to GoodWerk, working to do good. Okay—that’s not their official slogan, but it could be with the steps they are taking to get the younger generation out and voting. GoodWerk is a Chicago-based PAC (Political Action Committee) with a mission of empowering young people in the political process.

Since it’s been proven that the best way to reach new voters has been person-to-person interactions, GoodWerk created interactive Action Packs. The packs include colorful buttons, an enamel pin, collectible stickers, party horns (to celebrate on election night) and too-good-to-toss posters. Each Action Pack contains enough goodies to share with your community.

“I'm used to designing things for the web, not physical products” George mentioned. “So during the whole process I leaned a lot on Busy Beaver for help and advice.” George and his team recognized that fun swag makes talking to your friends about voting a little bit easier.

To make your own campaign swag, request a quote below.

Please fill out this form and we will be in touch within 2 business hours.

Those who are blind or visually impaired can now read buttons! We create braille embossed plastic that covers the face of each button, creating an easy-to-read 3D pin. Our printing partner uses Unified English Braille standards and all orders are proofread. Please allow an extra 2 weeks for production.

The history of the pinback button started with George Washington. Special clothing buttons were made for the coat he wore to his inauguration. Metalsmiths then started making similar buttons as souvenirs. So many of these button souvenirs were created and distributed that people are still finding them in the ground with metal detectors!

Though George Washington wore “pre-buttons” in 1789, there wasn’t much need for campaign items until the two party system began in 1828.

Presidential campaign buttons were made for the 1896 election between Republican, William McKinley and Democrat, William Jennings Bryan. Pinback buttons are now a staple of any campaign.

Here are a few of the great political button designs since 1896, courtesy of the Busy Beaver Button Museum:
Because these George Washington buttons were worn decoratively instead just functionally, they are a precursor to the pinback button.
Considered a “pre-button,” this 1864 Abraham Lincoln pin is made of brass and has a ferrotype. Check out the locking pin, it’s similar to the pins we use today.
William McKinley item declaring itself as a “button”. Since 1896, the button has been a staple in political campaigns.
The solar eclipse in 1900 influenced an array of button designs where one candidate “eclipses” the other.
Theodore Roosevelt rebus button (rose + “velt”).
Franklin D. Roosevelt and Wendell Willkie ran against each other in 1940. Called a "salesman's safety pin" because it plays it safe and has both democratic and republican presidential candidates.
One of the most iconic campaign designs and slogans in American history. Supporting Dwight D. Eisenhower in 1952.
JFK delivered his famous “ask not what your country can do for you; ask what you can do for your country” line at his inaugural address in 1961.
A clever design supporting Barry Goldwater in 1964. The glass is filled with a gold liquid plus the chemical name for water. Get it: gold water!
Jimmy Carter was a peanut farmer and known for his big smile. This type of imagery made him more relatable as a candidate. He became our 39th president in 1976.
A good example of how buttons distill ideas. While Reagan’s inaugural speech was 2,452 words, this button only has 1.
Karenna Gore is the oldest daughter of former Vice President Al Gore who was the Democratic nominee for President in the 2000 election running against Republican George W. Bush. In an attempt to reach young voters Gore helped her father's.
300 of these glow-in-the-dark “Glowbama” buttons were passed out for free at the 2008 Victory Rally in downtown Chicago. They are now collectables - one of only a few buttons at the event. Made by Busy Beaver.

A feature on the historical political buttons in the Button Museum.

Ten sets of buttons from the button museum collection and their role in memorable political debates.
Read the article >
×