As we approach the Button's 122nd birthday (July 21st), we're taking a look back at the year of its patent, 1896. It was an election year and the country was in the midst of an economic downfall. As Jack Dixey, a political button collector put it, "when the 'button' was born in 1896, the biggest issue of the presidential campaigns of William McKinley and William Jennings Bryan was a choice between gold vs. silver to back our currency. The issue divided the country and resulted in an abundance of '16 to 1' buttons, noting the ratio of sixteen ounces of silver being equal to one ounce of gold."

The value of silver to gold was consuming the country's political concerns, and was being portrayed to the American public in a few creative, expressive ways.

As Jack describes, "one of the most popular designs of 1896 depicted a clock face with the hands in a 16 minutes to position—16 to 1. This clock face concept inspired a wide variety of designs in various sizes and styles, some showing Bryan and running mate Sewall. The clever design assuredly delighted the public as they expressed their choice for president." 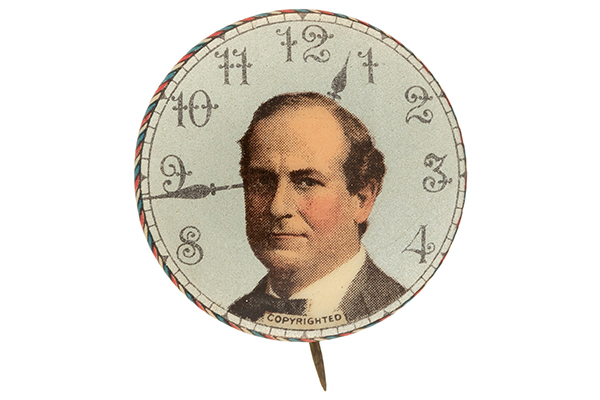 William McKinley's stance on the issue was in favor of gold standard, iterating that silver re-entering the country's currency would actually cause inflation resulting in a weak financial infrastructure. His supporters were referred to as gold bugs, as many of them came from "old money" families.

This button is a replica of an of a button made during the 1896 presidential campaign. The pin would have been worn by a person most likely supporting William Jennings Bryan and the “Free Silver” movement. 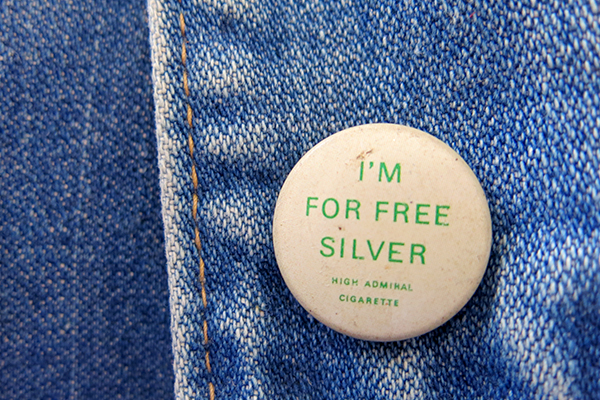 "The political issues of 1896 and since have been instilled in our political heritage and viewed on those little round billboards of promotion, the button." says Jack.

As an homage to this political issue from 1896, we've created our own 16 to 1 button pack for the Button's 122nd birthday. The pack features two button designs from Jennifer Daniel from our 2009 Button-O-Matic Artist Series. The packs are available at Busy Beaver or online in our gift shop for a limited of time!