You know the classic saying, "April Showers bring May Flowers" so the Button Museum is here to deliver a beautiful, button bouquet straight from the archives. Flowers can be used to symbolize a range of tranquil ideals, from peace petals to blissful blossoms, that when put on a pin, can be used to deliver poignant messages.

A Flower is Worth A Thousand Words

Running on radio, print, and television ads in the 80's, this button was used by the American Florists Marketing Council (theAFMC) to promote the services of its florists.

Along with "Keep Portland Weird" the pacific northwest city in America also goes by the clever name, "The Rose City." In the turn of the century, Portland's mayor, Harry Lane, decided to start the Rose Festival because the city's climate being suitable for growing roses. The first Rose Festival being held to celebrate the successful Lewis and Clark Centennial Exposition.

This button was also made using a "weird" process called the crystoglas process. This means that the buttons are produced by first placing a colored foil over over the metal base of the pin. After that, a clear celluloid layer is added on top of the foil to give off a special glisten to the pins. The process was developed in 1915, but quickly was over taken by more affordable means of button producing.

The Titan Arum plant that grows at Chicago Botanic Garden is named Spike. This flower is also known as the Corpse Flower, because of its potent smell resembling a rotting carcass.

When The Chicago Botanic Garden acquired Spike in 2003, he was just a seedling. After growing for 7-10 years, the Titan Arum is fully grown an can be up to 12 feet height when it starts to bloom. Since it is such a rare and special occurrence when the Corpse Flower blooms, The Garden hosts a blog, streams live video, and makes buttons for when Spike begins his blooming process. 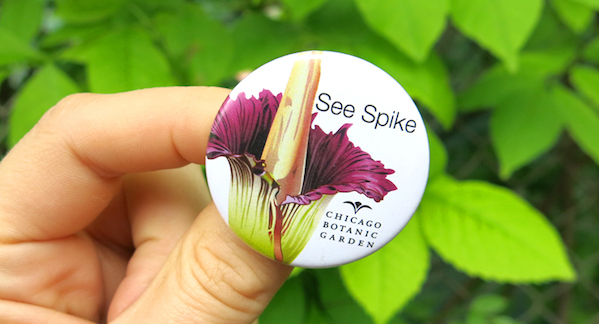 These 7/8 inch buttons were produced by The Whitehead & Hoag Co. Button Company for the American Pepsin Gum Company as part of a giveaway program. The chewing gum brand was incentivizing the collection of the entire flower pack which included the tulip, the pink carnation, the violet, and the scotch thistle pins which all featured the flower's meaning on the curl of the button.

This button from the American Cancer Society was produced as a 2.25 inch round button to help draw the comparison form stinky smokers to fresh smelling flowers in order to help raise awareness of good health in America. 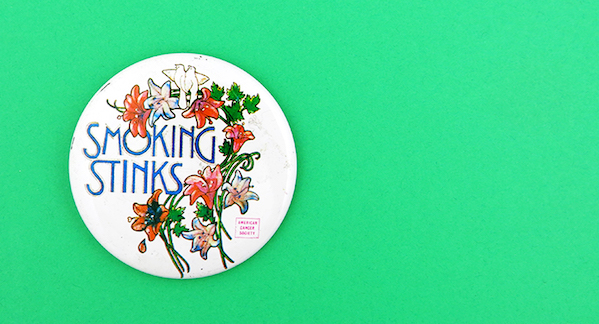 A long standing tradition is to sport a Poppy Pin on your label, also known as a remembrance poppy. The pins are used to commemorate military that have died in combat or any conflict. The origin of the flower being used to commemorate starts a poem inspired by World War I by Lieutenant Colonel John McCrae called "In Flanders Fields." A poem in which it is written in the perspective of a dead soldier reflecting on the poppy fields that will have to be turned up to make graves for fallen comrades.

Inspired by McCrae's poem, Moina Michael wrote her own ode called "We Should Keep the Faith." Michael attended the 1918 YWCA Overseas War Secretaries conference where she not only had a poppy pin fastened to her coat, but she also distributed the pins to 25 more attendees. 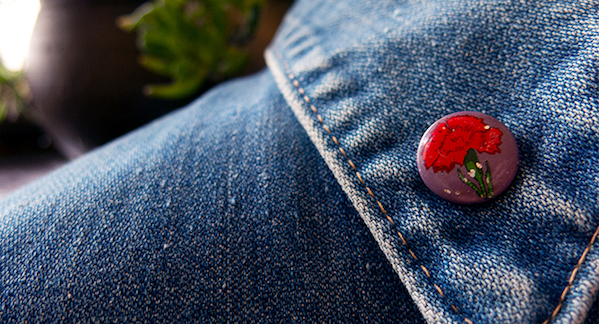 Organ Donors Are Good For Life!

Founded first as the Regional Organ Bank of Illinois in 1986, has then since been renamed as the Gift of Hope Organ & Tissue Donor Network, of whom created this daisy button. The not-for-profit organization helps organ procurement and organization that coordinates organ and tissue donation and services to families of donors.

The pin was created to help re-message the common cultural conception of organ donation with one that is more hopeful and accurate.