You might be familiar with the popular fashions of the 1920s: short shift dresses, bobbed hair and feathered headbands. But if you look closer at some old photos you might also notice a small and cheeky fashion detail hidden on a garter. Just 25 years after the pin-back button was invented, women of the 1920s began utilizing the button for function, fashion and a form of rebellion. 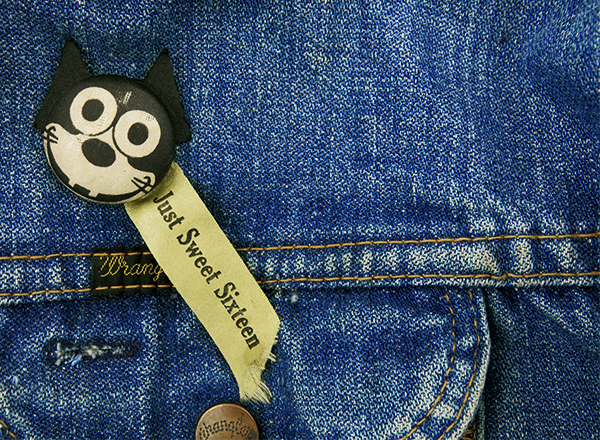 The ribbon attached to this button reads “Just Sweet Sixteen”. Other popular buttons of the time featured phrases like “Don’t Get Too Close” or policeman warning “Stop”, all alluding to changing social attitudes of the time.

In post WWI America, women felt a new sense of freedom. They joined the workforce, drove cars, casually dated and generally challenged traditional gender roles. The fashion of the time reflected that freedom; boyish silhouettes became popular, allowing women to ditch the restricting corsets of the past. Women who wore short shift dresses and bobbed their hair became known as “flappers”.

This button features a flapper wearing rouge on her cheeks and made-up lashes. The clover backing serves as decoration, but also as a suggestive offering that whoever was viewing it might get lucky.

The flappers’ rebellious attitudes were also reflected the accessories they chose. With the absence of corsets, garter belts with attached garters and roll garters became a popular way to hold up stockings, which at the time were non-elastic. Women opted to wear brightly colored garters adorned with pin-back buttons that bore cheeky phrases and sentiments. 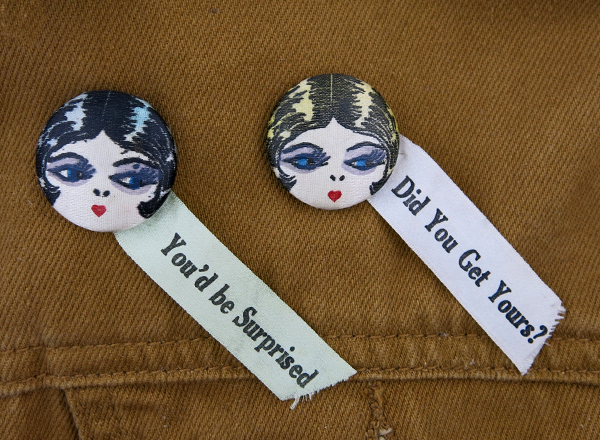 The suggestive phrases “You’d be Surprised” and “Did You Get Yours” would raise eyebrows even today.

Unlike standard pin-back buttons, which are printed on paper then topped and sealed with a plastic mylar, these 1920s buttons were printed on fabric that was then wrapped around the steel face of the button. A careful amount of detail was applied when finishing the buttons and additional decorative elements were added as well.

The button featured here has fuzzy fabric adorning the hat adding to its 3-dimensionality. Other buttons of the time would include a ribbon wrapped around the top of the button to look as if the character was wearing a headband. The innovation and craftsmanship of the buttons show the importance of fashion and true popularity of the flapper “look” in popular culture.

Although the concept of flappers faded during the Great Depression, using buttons as a form of expression is still common practice today. Buttons continue to reflect societal shifts; they are truly little works of art that allow a unique glimpse into a certain moment in history.